The first one I met was Keith. He was rehearsing for “Will Rogers Follies” on Broadway. I was there programming the first use of my theatrical sound automation system (Performance Automation).  We didn’t have much contact, but he was always cordial.  He was busy with his work, I with mine.  When the Producers and lead actors came into my studio to record Gregory Peck as the voice of Flo Ziegfeld, he was there (He played Will Rogers).  He was also there for some other studio sessions for the show.  So I met him as both the automation inventor/programmer and the studio engineer.

Years later, I was being considered for the Sound Designer, for an important Off Broadway show called “Mindgame”. The producers had suggested me as sound designer but Ken Russell director, wanted to meet me first.  When I quietly came into the theater, they were already rehearsing.  Keith and the two other terrific actors (Lee Godart, Kathleen McNenny) were on stage.  I wasn’t sure Keith would even remember me.  Just as the scene ended, Keith, before the cast was even released, bounded off the stage to shake my hand and say he was happy I would be involved with this production.  It made my day.

I met with Ken Russell. We discussed sound effects. He described a specific telephone ring he wanted; English, a specific period, a specific sound, a specific spacing between the rings. Ken’s background was partially with the BBC, and as a film maker.  Ken’s back ground was very long, good, and diverse.  What would have been a curve to most theatrical sound designers he threw this curve; He described the ring spacing in 35 mm film frames. “I want a 10 frame pause.”  Having been a film mixer, etc., I shifted into film language without hesitation.  Ken hired me on the spot.

Later, after the production was running a while, Charles (Fox), Joan (Fox), Beverly (Fox), Robert Blume, and Joseph Callarie all went to see the show.  After the show, Charles and Keith spoke.  One year at the Oscars, both Keith and Charles were up (nominated) for the same award. (I believe the award was for “Best Title Song of a motion picture”). Keith won for the song “I’m Easy” from the motion picture Nashville. They spoke about that. Both Charles and Keith were very cordial and complimentary.

David Carradine, I met through Ken Hatley. Kenny and I have been friends a long time, since the Richie Havens days. Richie used to say we were “his two aces in the hole”. Kenny is very experienced in all the many forms the music business takes.

David and Kenny wanted to record a live album. Kenny came to me to technically put it together and do the recording and mix.  I had researched David and found, some people said he had a drinking problem.  I didn’t believe it.
I always judge for myself.  We spoke on the phone and he seamed really together.  I had remembered him in his earlier Kung Fu days, and how could you have an alcohol problem and do any of the marshal arts.  Kenny thought David would be fine.

The session was a live performance it the “Iridium Club”.  The club was at least partially owned (I believe) by Les Paul.  They have a great but almost completely blind sound man there.  It has all Meyer speakers and sounded really good, and knowing there would be no feedback with this sound guy meant it would be perfect for the ambience of a live recording.

David’s performance was good.  He wrote songs like early Dylan but with a more country violin twang.  David’s performance patter between the songs was a little stilted but that didn’t bother me.  Some might say the same thing about Richie Havens although I never felt that way.  David’s voice was raspy but so is Dylan’s, who cares in this case. I used two different vocal mic pre-amps to make sure the vocal quality wasn’t altered.

After the recording was finished, we listened to the tracks. The tracks were good but as is almost always the case, some of the performances need to be fixed.  The vocals are fine. I don’t think he could have done a better job.

David wanted to schedule his brothers to play on the tracks. Keith I think was in New York. Bobby was in Switzerland. They all came to my little office on 45th street to overdub (add or change parts).

Bobby, I hadn’t met before he came to my office.  I knew of him as an actor in movies, but it isn’t wise or fair to make any judgments about people from their on-screen persona.  He turned out to be really nice too.  As a matter of fact they are all really nice; Smart, sensitive, talented and nice.  Bobby is also a heck of guitar player for this stuff of his brother. He has a very unusual double neck electric guitar; 12 String, and 6 String. I rented a classic Fender King for him to play on.  We got a great guitar sound.

What was fun was, it was with the three of them together.  I explained that as it is with my two brothers, we are all in the entertainment business and rarely get to be in the same room at the same time.  They agreed.  They have the same problem.  I insisted on pictures; One with just the three of them, and one with me and the three of them.  After we finished the Over Dubbing, I added to the record production deal that that picture would be forwarded to me so I could have a copy. I never got the picture. The album is still unreleased.

David’s friend and co-record producer, Kenny Hatley informed me Hillary Clinton had looked into the death, and David’s death has been reclassified as a homicide.

Annie Carradine found the pictures and sent them to me. 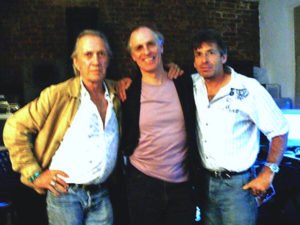