I don’t know what the motivation for inventing/creating is. I don’t even know if there are a number of motivations, or just one. What I do know is, I have always just done it. There was and is always inventing or analyzing creation going on in my head.  Often rethinking a piece of music in my head.   Perhaps, it is because inventing/creating the future, should be uplifting.   And I cherish this kind of uplifting feeling.

As a little child I imagined all kinds of inventions. And when I wasn’t lost in my head, thinking of the future, I was analyzing the great creations of the past. (I have a vivid memory for be scolded by an elementary school teacher for “daydreaming” as she called it, as I was actually outside the window thinking all kinds of things about the sunlight and the Begonias on the window ledge.)

We kept KOSHER in the house so my mother had 4 sets of dishes; one for dairy, one for meats, and two of those same types for Passover.   Cooking and dishes was ongoing, while she taught me how to take things apart and learn how they worked. Pretty soon I had come up with an idea to replace the dishes cupboard with a machine that would make dishes. If you need a set for 5 for breakfast, you make it. If you need a set for 8 for dinner, you make it. If you want to change the pattern you dial in a new pattern. And after eating you simply through the dirty dishes into the machine, it would melt down the materials, separate the organic from the inorganic and be ready to make more dished from the same inorganic materials.

And there were always other ideas floating around in my head. A way to capture lightning consistently and use the power. Why was everybody always making fun of Franklin. He knew lightning was electricity and tried to capture it. And then there was a way to move people around very efficiently using repulsed magnetics to reduce friction. Get inside a personal pill-like capsule, dial in a destination. And press the button. You would be whisked at a bullet-like rate, into tubes that co-ordinated locations and other capsules, to your office or place of work. (The hard part with that idea in the 1950s, was coordinating the magnets, without computers). I don’t think I was even in school at this time.

And my mother always heavily supported my taking things apart, and figuring them out. When televisions were new, and we were one of the first to have ones in the neighborhood, she never stopped me from taking it apart. (That old Dumont never did stop working.) I couldn’t have been more than a few years old when a TV service man came to install a roof antenna. My mother’s sister, my aunt, was named Anna. When the service man finished installing the antenna on the roof, he came downstairs to exclaim, “He put the antenna on the roof”. And My immediate question was if Aunt Anna was on the roof why doesn’t she come down and visit me.

I learned amplifiers, and RF antennas by mucking around with things. It was dangerous in retrospect, but what did I know, I was a kid, and my mother said it was OK. I learned respect for electricity when I stuck a toy arrow into the wall socket

Not much later, I was on my father’s shoulders, fixing the ceiling fixtures, which had pull-chain lights at the time. (We had no ladder or tools, except for a scissors and a screwdriver.) I would sit on my father’s shoulders, unscrew the fixture, install a piece of wire between the hot leg and the lamp, and then back to the neutral, and put a switch on the extended wire. So now we had a switch controlled ceiling light instead of a pull chain. I must have been 7 or so, at the time. I know because Charles would fly in the door, run to the bathroom, jump up and smack the pull chain light to turn it “on”.   He often pulled it from the fixture. My father would come home and complain about the light chain always being broken. He would always wash-up after work, and begin by turning on the bathroom light, pulling the little string that led to the little chain that led to the fixture. (Once I covered for Charles and my self. We took the little tiny chain and wrapped it around itself, so it was “OH SO” precariously balances on the nub of the fixture. When my father came home, he only breathed on the string with his hand, and the string, chain fell. Now we had him convinced how easy it was to break) 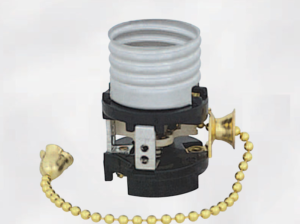 By the time I got to the end of the 6th grade, I was accepted into the rapid progress classes (the 2 year SP). I was pretty traumatized by having to choose between different science classes, and music. They said I couldn’t have it all.

I was freaked out by it all, but came up with my own solution. I cut all the Gym classes and all the French classes and only went to Science and Music classes. Nobody ever checked, until it came to graduation. Graduation required four years of gym classes, and I had none. So I never graduated High School. Later, in order to get a Teachers License I had to have a High School diploma and College diploma. I had neither. I ended up taking 4 years of summer school gym one summer, and some teaching courses another time, to get the needed credits.  (after that summer of summer school gym (about 8 hours of gym a day), boy was I in good shape.)  (BTW-I now hold a N.Y.S. Vocational Teachers License)

When I got into audio, inventing was very natural. Everybody in audio was chasing sounds and techniques. So for me chasing sounds, techniques, synchronization system, and uses of multi-track was just a natural addition. We at RKO didn’t even realize we were doing something unique. Sure people were using 4 track tape and recording on film, but it never dawned on us that using 32 tracks of film, and a form of automated mix-down was something different. It was just better.

Through the late sixties and early seventies I recorded many music films, synchronizing multi-track audio with multiple pictures. It was always done by yet a different invented method, but it led to inventing in more in earnest.