“GET OUT OF MY WAY SHRIMPY!”

Over the years I have been asked to present a number of live presentations for the Audio Engineering Society. The AES is the Society of Audio Engineers, for any kind of sound. Live sound, recorded sound, film, theater, sound design, any kind of sound person would join the AES. They have their expo every year, every other year in New York City.

One year a collection of papers on theatrical sound was presented. Unlike my other presenters, who went way over the time limit and frankly bored me to death. (Me almost falling asleep in the auditorium, as I waited for my turn.) When preparing for this lecture/demonstration, I got the notion that in this presentation on theater sound, I should demonstrate with a piece of theater showing my proposed sound changes. My presentation was not a long drawn out lecture, it was a silly piece of theater to prove the point.

This AES presentation was held in a large Broadway theater. (The Marriott Marquis I believe) On the stage was a typical small presenter’s podium. From there, each presenter spoke. During my presentation, I moved the podium to the side, leaving room for a large, free standing, rear projection screen. Under the screen, hidden, were a few full range speaker systems, out of sight. On the screen was a slide I had taken many years before while visiting the Coliseum in Rome. The Coliseum picture was projected so you could not see the cars that were in the original shot. Now it was just a large coliseum backdrop.

My presentation began with a brief explanation of what sound effects could do and why they should be precisely synchronized to the activity. That through the use of Wireless Midi Triggers, each actor could precisely fire (execute) his own sound effect, creating a flawless connection between the acting and the expected sounds of that acting.

Then my theater piece began. Two friends, both audio engineers and musicians, Dan Traymon and Gene Perla came on stage. Each was dressed very badly in rented togas. Gene is 6 foot 4 tall. Dan is about 5 foot 6. Dan was in sandals. Gene was in only socks (silly already, looking like a male version of Olive Oil). Each carried a long “He Man like” plastic light up sword. Each carried a makeshift disc of foam held from the back with gaffers tape like a shield. They were dumb orange discs, as I remember. Both the swords and the shields were clearly plastic and not metal. And the whole presentation looked pitiful and silly. If there were any set or costume designers were in the room, they would have killed me. Fortunately there were only sound designers.

The dialog I had written was also dumb. The two minute storyline was as follows: Two coliseum spectators, heading into the Roman games were pushing at the entrance gate. They were to pick a fight with each other. Finally, with the line from Gene “Get out of my way Shrimpy!” they were to draw plastic swords and start a sword fight.

Dan struck first. With the bringing down of plastic sword on Gene’s foam shield, Dan squeezed the sword’s light trigger. I used this light trigger to wirelessly and precisely fire a midi note, which in turn wirelessly fired Dan’s sword sound. A giant sword clang erupted from the invisible speakers. The whole audience sat forward in their seats. I saw them all come forward like in one motion. I knew I had them. Then with Gene’s counter strike, Gene pulled his trigger and a different sword clang blasted into the audience. The audience was clearly excited.  Clang, Tapang, Clang, Tapang.

The fight went back and forth for several seconds.  With each precisely synchronized hit, the audience got wilder. It didn’t matter any more that the swords were plastic and the shields were foam. The sounds so tightly tied to the live action made the whole sword fight believable. Finally somebody killed somebody and the show was over. Dan and Gene got a round of applause. (They were both real good sports to put up with my shenanigans.)

The demonstration was a big hit. 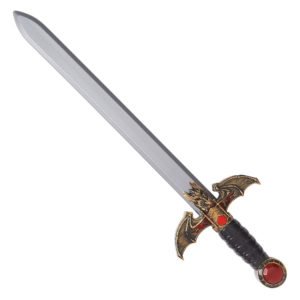 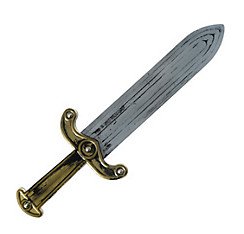