My wife and I decided to take a European vacation. While on vacation my partners had committed the studio to producing a movie about the Hells Angels. Director and one of the partners Leon Gast, was friendly with Sandy Alexander the Hells Angels New York Chapter President. I wouldn’t have wanted to make this movie, saying to him “Why a movie about the Angels?” but it was already a done deal.

When we got back to the US, I did whatever I could to help the movie. There were some sessions in the studio and some filming outside the studio. I recorded location sound for Vinnie’s birthday party. When Vinnie got his birthday cake, he took out his sword and cut the cake. At one point the Angels rented a Ferry Boat and threw a party on board the boat. Alan Manger and the rest of the Good Vibrations staff went on the boat ride to record the music. I stayed in the studio to hold down the fort.

At the end of the boat ride everybody making the film was exhausted, except for some of the Angels. Sandy Alexander and Big Vinnie and a bunch of other Angels, two dogs, a case of Jack Daniels, and two Angel ladies, took the multi-track tapes from the boat ride and came to the studio for a playback. I was there alone with all of them. All of us pretty much jammed into a relatively small control room.

The two acts that had played on the boat ride were the Grateful Dead and Bo Diddley. So in the door walks the Angels, entourage, and the tapes for a late night playback.

I put a recorded reel of tape on the machine, and started to play it. It took only a second to get a reasonable balance in our small but loud, Good Vibrations control room. It sounded really good and I turned it up to make them happy. Every body was rockin’ to the music.

In the middle of this playback Vinnie, a giant guy weighing maybe 350, takes out his ball-peen hammer, which he carried in his pocket, and starts banging a rhythm on the console. (Doesn’t every body carry a ball-peen hammer with them?) With each hit he leaves a muted silver dent on the aluminum facing of the black anodized console. He’s playing the console with the hammer like they were bongos, and I have to stop him.

I know stopping the tape in the middle is going to get me scolded. (Hopefully not thumped) I stop the tape anyway. All eyes are on me for stopping the tape, the room goes from like 120 dBSPL, to very quiet. I feel the tension in the air. Every body is looking at me with a “why did you stop the fun look?

I turned to Vinnie and said, “The console to me is like the motorcycle to you.” “Please don’t hit the console.” Vinnie looks at me with anger in his eyes. I don’t know how he’s going to react. He doesn’t look like he understands. All of a sudden, Sandy hauls back and punches Vinnie in the chest. Vinnie isn’t hurt or gasping or anything. But Vinnie turns to Sandy with a “What’s that about” in his eyes. Sandy said to Vinnie, “Don’t hit the console.”

And with that I went back to playing the music.

I never had any problems with the Angels. Years later, when I bumped into Sandy Alexander, we spoke for just a second and we each went on our way.

A few years ago my wife went back to smoking. I wanted her to stop, which she did while pregnant. I threatened her with, ‘if she keeps smoking I’m going to take up motorcycle riding”. She thinks that is the most dangerous thing to do.  As far as I’m concerned, its not any more dangerous then smoking. I have a negative reaction to cigarette smote.  Whenever someone lights up anywhere near me, I cough like crazy.  She still hasn’t stopped.  I have rebuilt the bike and have begun riding.  I am now looking for a sidecar. 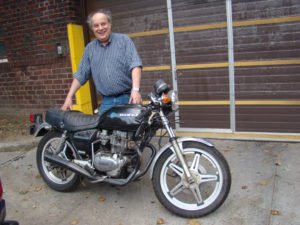