***** (5 stars)
A great example of how the archives of recorded time has been preserved. The passages on this LP are from the actual radio broadcast, Not something taken from a tape, they are archived from the original 4 large 16in acetates that were cut directly from the radio transmission. Note that this whole concept was done live in a studio with actors, sound effects records, gadgets and many other noise makers. It represents a moment in time when the “average joe” had their ears glued to their radio tube sets in utter hysteria. This was an performance where the stage was the eardrum of each human who heard it. Too bad some people took it too seriously. 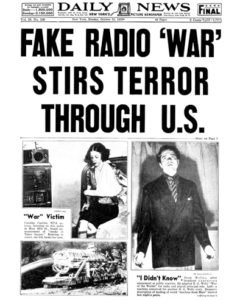